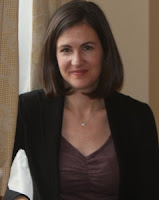 The Writers at Bridge and Main Reading Series from Wolfgang Books and Steel City Coffee House conjessica francis kanetinues on October 16th with Jessica Francis Kane, author of The Report. Join us for an interview with Jessica, a reading, and a question and answer session. Copies of the book will be for sale at the event and are in stock now at Wolfgang Books. The program will begin at 3 pm, though we suggest that you arrive a little early to pick up a drink or snack and grab a good seat. As always, the event is free and open to the pubic.

The Report has received a tremendous amount of advance praise and has already received nominations for several awards. Here are a few words from Jessica about her novel:

"The story centers around a night in March 1943 when nearly two hundred people died seeking shelter from what seemed to be another air raid in East London. In all cases, death was by asphyxiation; there were no broken bones.

The incident is real. It was the largest civilian accident of World War II. My novel reimagines the story, following a handful of characters who are in various places in the crowd the night of the disaster: the shelter warden, a young clerk, a mother and her two young daughters. The government tries to suppress news of the accident, but when the devastated neighborhood demands an inquiry, the job falls to magistrate Laurence Dunne.

As Dunne investigates, he finds the truth to be precarious, even damaging. He works quickly, interviews dozens of witnesses, and hopes to write a good report in the belief that the document will restore the city's confidence.

But years later, when he is interviewed by one of the children who survived the night, Dunne is forced to consider whether what he did was right."

We hope to see you at Steel City this Saturday to hear more about this excellent novel.