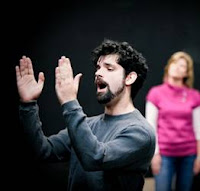 
You’re a 35-year-old bachelor with three girlfriends, and all your married friends are pressuring you to get married. What do you do? Forge Theatre in Phoenixville is proud to present Company -- Stephen Sondheim’s Tony-award-winning musical comedy. Company is a series of quirky, touching and hilarious vignettes about Bobby, his friends, his girlfriends, and his fear of commitment. This bittersweet, clever musical explores love, fear and longing, and the simple joy of being alive.

As one of musical theater’s most noted composers/lyricists, Sondheim’s work is featured in musicals including Sweeney Todd, West Side Story, Sunday in the Park with George and A Little Night Music. Company, which has earned 17 Tony Awards. includes some of Sondheim’s most brilliant songs, including "Getting Married Today", "The Ladies Who Lunch" and "Being Alive."