November 16, 2010
Celebrating a decade and a half of local craftiness:
SLY FOX BREWING COMMEMORATES LONGEVITY WITH AN EVENT TO REMEMBER 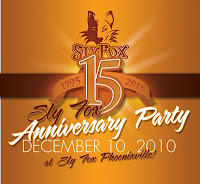 Phoenixville, Pennsylvania-- When Sly Fox Brewhouse & Eatery, Phoenixville’s first brewpub and the longest surviving brewpub in the Philadelphia area, celebrates its 15th anniversary with an all-day fete on Friday, December 10, it will do so in the company of two other area businesses also recognized for their efforts to promote buying, dining and drinking local.

ANNIVERSARY PARTY
Sly Fox Brewhouse and Eatery’s day-long celebration will kick off at 10:00 am with a special Brewmaster’s Breakfast prepared by guest chef Andrew Deery of the popular Phoenixville BYO, Majolica. One of the many special features of that meal will be the first-ever pouring of a new Sly Fox beer, Majolica Blend Coffee Porter, a creative production in which the beer will be infused with a special coffee blend roasted by Steve Polignano of Kimberton Coffee Roasters for Majolica. The breakfast will be a ticketed event with limited seating.

“Sly Fox has taken great pride in its hand-crafted beers since the doors first opened in December 1995,” says award-winning brewmaster Brian O’Reilly, “and it seemed a perfect match to involve two other small, local companies which have the same standards and dedication to quality (as Sly Fox) into our anniversary party. I’ve worked with Andrew before when we did a beer dinner at Majolica which sold out in a matter of hours and I’ve certainly had my share of Kimberton’s coffees, including the Majolica Blend which Steve makes especially for Andrew.”

HOP TO IT
The selection of the second Friday in December for the anniversary event is a continuation of the schedule for a program called The Hop Project which Sly Fox initiated in 2004. A series of single-hop beers was brewed monthly throughout the year and on that day all of them were on tap for the only time. It was also the day that the brewery’s Odyssey Imperial India Pale Ale was released. Hop Project Day became something of a beer holiday for aficionados of craft beers, drawing attendees from as far away as North Carolina. Last year saw the finale of that series and, as of 2010, the day has been established on the schedule as an annual anniversary party.

This year, in addition to the introduction of Majolica Blend Coffee Porter and the annual release of Odyssey, the brewers will formally introduce another new beer. Succubus, a sour version of the year-round Incubus Tripel will be available for purchase (two per customer) in limited edition 750ml bottles.

ALL DAY LONG
Beginning at noon and throughout the day, Sly Fox will feature food and drink specials, including brewer designed, distinctive flights of related beers and a one-day only tapas menu. There will be 23 or more beers pouring at all times and firkins of vintage 2009 & the 2010 Odyssey will also be tapped. Live music from local favorite Holt 45 will add to the fun in the evening. There will even be an opportunity for long time fans of Sly Fox to grab the microphone and toast their venerable pub!

Sly Fox Brewing Co. was founded by Phoenixville, Pennsylvania’s Giannopoulos family in the early days of the craft beer revolution which has swept across the nation over the past decade. Sly Fox Brewhouse & Eatery, which relocated to its present location at 520 Kimberton Road in the Maple Shade Shopping Center last year, won several awards for its beers during its early years and really took off with the arrival of O’Reilly in the spring of 2001. His beers have won five medals at the annual Great American Beer Festival in Denver, three of them gold medals, the highest award. In 2004, the company opened a restaurant and production brewery at 312 N. Lewis Road in Royersford. It has now become a leader in the move to package craft beer in cans, the fastest growing trend in the industry, and its beers are currently distributed and sold across Pennsylvania, New York and New Jersey while other states clamor to be added to the list.