Open Letter: Suggestions on ways to improve traffic during the Dam constuction project

April 24, 2015
Reader Dan E. recently wrote in with an idea on how to ease congestion on Valley Rd/White Horse. We would love to hear your thoughts and suggestions. And if any of you have an in w/ PennDot or the borough, please send them this link to see if they can weigh in.

A major cause of the problem is the 3 consecutive lights on Whitehorse Road (at the intersections with Creek Rd, Pothouse Rd and 23). However, it is not necessary to allow through traffic on Pothouse Rd between Whitehorse and 29. The only locations on Pothouse that require access are the elementary school, the YMCA and a few houses. So here's the idea:

Eliminating this light should greatly help improve traffic flow and minimize the alternating of traffic between Whitehorse and Pothouse. A few more points: 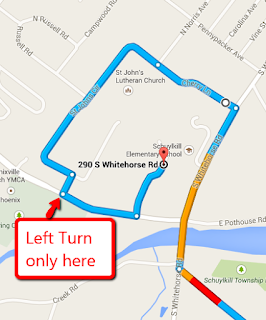 Thoughts on his proposal? Alternate solutions for this or other bottle necks caused by the construction? We'd love to hear and will keep this post updated w/ additional suggestions.

Maryanne said…
No thank you!!! We live on Pickering and have had several months of people flying down our street to cut thru already. It's been ridiculous.
4/24/15, 1:55 PM

Dan E said…
Hi Maryanne. I live nearby and understand the traffic on the street. The cutting through recently had two causes:
1. For the last few months construction on 23 caused rerouting down Pickering. That is now complete.
2. And now the bridge closing.

IMO, the cutting through is a result of the traffic being so bad. My thinking was that by removing the Whitehorse/Pothouse light, traffic is lightened and the incentive to cut through is then reduced.
4/27/15, 12:59 PM

Anonymous said…
This would be horrible! I work on State Road, a couple of houses up from the intersection of State Road and Pothouse. The ONLY way out of that driveway is to make a right on State Road and at 7am no one wants to let you out in front of them. Due to the bridge being out, which I used to go to and from work, I use Whitehorse to pothouse to state road. It is hard enough getting around and it doesn't need to get harder because people have to sit for a few minutes extra. People shouldn't have to add even more time to their commute because you want to close roads to avoid backups. If you don't like how long you have to sit at a certain light, find another way around! Don't force everyone to reroute because you can't sit in traffic. The inconvenience isn't going to last forever...deal with it!
5/3/15, 10:33 AM