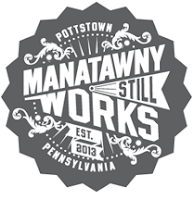 Pottstown, PA - Decemberber 11, 2013 - Have you ever asked yourself, “What if ?” That’s exactly what founding partners John Giannopoulos, Jeff Vaughan, Paul Czachor, Al Matarazzo and Derek Menaldino asked themselves when they first discussed opening a craft distillery in Pottstown, Pennsylvania. Fast forward twelve months from that casual conversation and Manatawny Still Works - the first craft, small-batch distillery in Montgomery County since 1969 - will be opening to the public in February, 2014.

The 7,500 square foot facility is located behind the Pottstown Municipal Airport in the Circle of Progress Industrial Park on the banks of Manatawny Creek.

Manatawny Still Works (MSW) has entered into a working relationship with their neighbor on the Circle, award-winning craft brewery Sly Fox Brewing Company. The brewery will be producing the wash - the first step in whiskey production - from their state-of-the-art brewhouse.

“To make great whiskey, you have to start with great beer,” says Pfeffer who is working on the installation of the company's new still. “By focusing on the best ingredients, you’ve got a head start on bottling great spirits.”

The barrels are stacked and awaiting the first batches to come off the stills. Even though you'll have to wait two years for the new distillery's signature spirit, Pennsylvania Whiskey, MSW will launch with an unaged white whiskey aptly named, Virgin Whiskey and a light rum called Sedition.

“There is a lot of history with liquor and spirits in Pennsylvania,” says Pfeffer. “Not only will we concentrate on the more traditional spirits like vodka, rum, and whiskey but we’ll do some seasonal small batches that will only be available in our tasting room at the distillery.”

Max isn’t revealing too many of his secret recipes but he says, “I’ve got a few things up my sleeve, so stop in, get a tour of our facilities and taste the difference.”