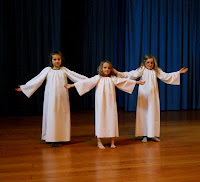 Camphill Village Kimberton Hills presents Noah and the Flood and Everyman, two musical productions on one stage, from March 24-25, 2012.

Like all productions at Kimberton Hills, this one also features a cast of children and adults from within the Camphill Kimberton community, and from the wider community. The children carry the main part of the play, either as Noah's sons and their wives, or as naughty town children who taunt Noah's sons while they are working on the ark, or as angels in the very first scene, when we hear how all is planned on a spiritual level.

Members of Camphill Kimberton’s music workshop are involved both on stage and among the instrumentalists. The play, in its relative simplicity as a class play, offers immense possibilities as a community play for a cast of very different ages and capacities.

"I want to express my gratitude to Eugene for offering this musical to me," says Veronika Roemer, director. "Every new musical, from looking at it for the first time until it's ready for performance, is like a journey, or making a new friend. This musical has been a journey of discoveries and delights."

The second piece, Everyman was composed by Colin Tanser for children's choir and lyre orchestra. "I felt inspired to add this beautiful piece of music to the program because it carries a similar message as the musical," says Roemer. "I arranged it for a small instrumental ensemble, instruments that are already needed for the musical like flute and oboe, and others played by cast members. I added bordun lyres and bells, so that everyone cast in the musical can also participate in Everyman."

This is the seventh show produced by Roemer, who lives and works in Camphill Kimberton, an intentional life-sharing community that includes adults with developmental disabilities.

All shows are in Rose Hall. Suggested donations are $10 for adults, $5 for children, and $25 for a family.