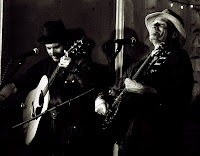 Beaucoup Blue is the Americana Philadelphia based duo of David and Adrian Mowry. Father and son have been performing their roots based music nationally and internationally as a duo, quartet
and on occasion quintet. Bridging many gaps in American music, their soulful traditional and contemporary styles mesh into an innovative and authentic sound. Although blues is a staple in their repertoire, they base their love in music from Folk, Soul, R&B, Jazz, Country and Bluegrass. All these interests and influences come out in their original song-writing in a unique way. A handsome range of instruments like six and twelve string guitars, slide guitar, round neck resonator guitar, combined with two soulful voices, encompasses a rich and honest feel, noticeably influenced by familial ties. Hear for yourself two generations coming together
for the common good of great music everywhere.

Beaucoup Blue had previously released two albums: “Out Of The Woodwork

”, is produced by Grammy nominated Jim Salamone. The project features a world class rhythm section including Jeff Sheard on drums, Bill Zinno on acoustic upright bass as well as the extraordinary talents of a few friends. A guest appearance of Universal recording artist Melody Gardot, and the ‘Americana Angels’ of Red Molly contributed their voices to this important work in classic proportion.

Other recognition
Gene Shay of WXPN in Philadelphia says of Beaucoup Blue: “...They are one of the best and most exciting new acts to come along in years. I love their sound and their songs.”

Sarah Craig of Caffe Lena America’s Oldest Continuously Running Coffeehouse says of Beaucoup Blue: “...This powerful yet gentle father-and-son duo gets their audience lost in reverie with arrestingly soulful blues-based music. Their original songs blend folk, R&B, jazz, country, and bluegrass together in songs that might be classics, or might just sound like it.”

Sing Out! Magazine.- “Their voices work superbly together, frequently attaining a mesmeric panache that must be thrilling to view in person. Beaucoup Blue is a versatile, imaginative team that has something to say and say it with an adventurous sense of personality from the bottom of their hearts.”

Richard Cucarro from Acoustic Live NYC says- ”David's slide guitar is the first thing you notice. In tandem with Adrian's deft finger-picking it's precision and grace is the aural equivalent of a hot fudge sundae.”

City Paper Rochester, NY- “Beaucoup Blue is riveting and haunting, with that kind of beauty you can still hear long after the last note fades away.”