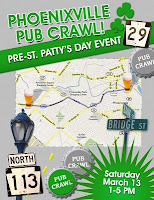 
There will be nine participants in this year's Phoenixville Pub Crawl with will feature a meet the Brewer(sic). Each of the participants will have beers from different breweries as well as representatives to chat with some of the folks attending. The lineup is as follows:

The crawl is from 1-5pm. For those so inclined, a 'Pre-Pub Crawl 5k' has been organized beginning at 10:30 tomorrow morning.  The run starts at the clock in Reeves Park. Additional event information can be found here.