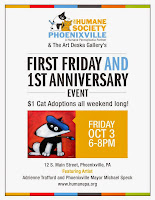 The First Friday event, October 3, 2014 from 6 – 8 p.m. will feature renowned artist and creator of Humane Pennsylvania’s omnipresent Spike & Tilly logos Adrienne Trafford as well as Phoenixville Mayor Michael J. Speck. In addition, and as a special thank you to the Humane Society Phoenixville’s new friends in the community and in order to commemorate the 1st anniversary, all cat adoptions will be just one dollar ($1) all weekend long from October 3, 2014 through October 5, 2014.

“The Phoenixville community has been great for us to be a part of and has been really supportive. We are excited to build on the relationships we’ve started and look forward to what the coming years will bring,” stated Karel Minor, President and CEO of the Humane Society Phoenixville, a Humane Pennsylvania partner.

Since October 4, 2013, when the Humane Society Phoenixville officially unlocked its doors, the organization has been an ever-growing presence in the northern Chester County community. Over the course of the year, the Humane Society Phoenixville has served the area through its one-of-a-kind cat adoption center, pet retail boutique and art gallery. Together, hundreds of cats and dogs have been helped either through adoption or through our free vaccine and microchip clinics. The Art Deska Gallery has also featured over a dozen local and nationally renowned artists and there was one awesome sold out Pints for Pups event with 200 supporters and imbibers.

Light refreshments will be served from 6 – 8 p.m. on Friday, October 3, 2014 as well as throughout the day on Saturday, October 4, 2014 during the Borough of Phoenixville’s Food Festival on Main Street. Please join us!