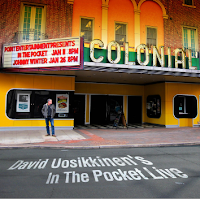 On Saturday, October 19th, David Uosikkinen (famed drummer of The Hooters) brings his In the Pocket project to the Colonial Theatre. Press release below:

PHOENIXVILLE, PA - (September 20, 2013) - Fresh off their rockin' performance at the Philadelphia Folk Festival (where they were joined onstage by Todd Rundgren and closed Saturday's show), David Uosikkinen's In The Pocket returns to The Colonial Theatre in Phoenixville, PA (227 Bridge Street; 610-917-1228). On Saturday, October 19th In The Pocket will celebrate the release of their new single and video short, I Saw The Light, originally recorded by Todd Rundgren in 1972. Showtime is 8pm. Tickets are $19.50 - $34.50 and are available at thecolonialtheatre.com.

In The Pocket's live show is a rock n' roll revue with a revolving cast of Philadelphia's most celebrated musicians. I Saw The Light features Phoenixville's own Cliff Hillis on lead vocals and guitar, The Hooters' Fran Smith, Jr on bass; from Smash Palace Steve Butler on guitar and Wally Smith on keyboards; and of course The Hooters' David Uosikkinen on drums.

"I Saw The Light is the second song I chose by Todd Rundgren (Open My Eyes was the first). For me, Todd is a Philadelphia icon and one of the most important musical forces to come out of Philly," explains drummer David Uosikkinen. "Cliff Hillis was the natural choice to cover this track. Cliff has molded himself as a singer-songwriter, multi-instrumentalist, producer and engineer, very much like Todd Rundgren. He has those same power-pop sensibilities that I loved in Todd's earlier work."

The show at the Colonial Theater will include players from all eight songs: All My Mondays, Open My Eyes, You Can't Sit Down, Soon You'll Be Gone, Change Reaction, Disco Inferno, I Ain't Searchin' and I Saw The Light.

All In The Pocket songs are available for download at songsinthepocket.org. A video documentary by award winning producer/director Steve Acito of Bluewire Media is produced to accompany each song. Acito's long-form documentary of David Uosikkinen's In The Pocket was nominated for an Emmy award.