Elska Live at the Colonial Theatre 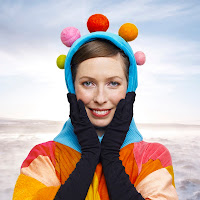 Elska, a new award-winning family music artist, will be performing in the Philadelphia area at The Colonial Theatre on Tuesday, August 13th at 10:30 AM for a special all-ages concert with songs about her life on her imaginary Arctic Island.

Elska, played by NYC-based singer/actress Shelley Wollert, has been making waves since the release of her award-winning debut pop-electronic album Middle of Nowhere. Elska is backed by a spell-binding blend of metallophones, chimes, bells, and twinkling analog synthesizers that entrance children as they learn about Elska's beautiful island and her small group of quirky friends.

Check out Elska's video for the song "Midnight Sun in the Arctic" to get a feel for the ambient, dreamy magic that is Elska.

Tickets for the show are just $8.50 and can be purchased at the Colonial Theatre website.