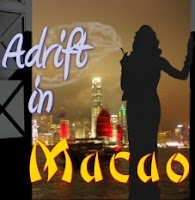 Why Are They Waiting?

Everyone who comes to Macao seems to be waiting. What are they waiting for? They don’t really know. And as they wait, strange things begin to happen...

Join the sultry nightclub singers, trench-coated villains and other exotic underworld characters who inhabit the world of Adrift in Macao. A hilarious, irreverant musical comedy set in the steamy, shadowy world of 1950’s film-noir, this witty parody takes you deep into the mysterious tropics where anything can happen -- and usually does.