Forge Theatre Presents "The Importance of Being Earnest" 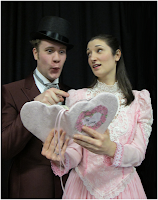 
What happens when two pretty young girls both fall in love with men they believe to be named Ernest? Will they learn that a rose by any other name still smells as sweet?

Forge Theatre in Phoenixville presents "The Importance of Being Earnest" by Oscar Wilde. This delightfully witty, light-hearted romp through high society follows the antics of two bachelors trying to win their ladies’ hearts by earnestly pretending to be Ernest.