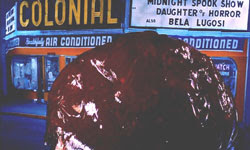 BlobFest is set to return this weekend. Things kick off on Friday night with a stage show followed by the popular “Run Out” reenactment. Saturday features the StreetFair with live music by rockabilly band Full Blown Cherry and, at noon, the Fire Extinguisher Parade as well contests throughout the afternoon. All weekend long the Colonial Theatre will be showing The Blob and other cult classics. Joining the fun this year will be Mystery Science Theater 3000’s Joel Hodgson who will help judge both the Costume and Trivia Contests on Saturday afternoon.

PHOENIXVILLE, PA – The 15th annual BlobFest, The Colonial Theatre's kitschy, family-friendly event saluting the 1958 classic sci-fi movie The Blob, will take place July 11th through 13th at the theatre in Phoenixville, PA. The Blob was filmed in and around Phoenixville, and The Colonial Theatre plays a key role in the film. The theme of this year’s ‘Fest is “Clash of the Kaiju,” and features a celebration of Japanese monster films of the early 1960s. Mystery Science Theater 3000’s creator and host Joel Hodgson is special guest on Saturday afternoon. BlobFest is sponsored by Staybridge Suites Royersford.

The event begins Friday, July 11th, with a stage show and “Run Out” reenactment at the theatre hosted by BlobFest’s own Dr. Frank N. Stone. Horror host Mr. Lobo will emcee. Doors open at 7 p.m. for this weird and wacky night that features live music by Tokyo Joe and the Panic, plus the Shorty Awards recognizing the winners of BlobFest’s eighth annual amateur short film contest, a screening of the winning films, a special dance performance and audience participation. Ghoul A Go-Go and The Patient Creature characters, plus the “real” Blob and its caretaker, Wes Shank will be on hand as well. Special guest and Godzilla expert August Ragone will join the mayhem on Friday and return Saturday for a “Meet and Greet” and more.

Friday evening culminates with the crowd favorite, the reenactment of the "Running Out of the Theatre" scene from the movie, at approximately 9 p.m.
Tickets for this event are sold out, but fans are encouraged to gather across the street from the theatre to watch the Run Out.

BlobFest continues Saturday, July 12th, at 11 a.m. with the StreetFair featuring live music by rockabilly band Full Blown Cherry. At noon the Fire Extinguisher Parade takes place as a tribute to the humble piece of firefighting equipment that saved the world from The Blob. All are invited to join in the parade. The StreetFair then shifts into full gear with music sets by the band throughout the afternoon. A Costume Contest for fabulous cash prizes will take place at 1 p.m., with contestant registration beginning at noon. Registration is $5 per person or costume group entry. A family-friendly Tattoo Contest will be held on the StreetFair stage at 2 p.m. Phoenixville’s Into the Sun Tattoos is providing the prize of a tattoo to the winner. Other events on the StreetFair stage are a Trivia Contest co-hosted by MST3K’s Joel Hodgson at 2:30 p.m., and “That’s Kaiju to You: Talking Monsters with August Ragone” at 3 p.m. Storytelling by The Patient Creatures will take place at 2 p.m. and 3 p.m. at Steel City Coffee House. An all-day hot rod car show and food and merchandise vendors round out the StreetFair, which ends at 6 p.m.

Multiple showings of The Blob, plus two other B-movie kaiju classics, will take place inside The Colonial Theatre on Saturday. Throughout the day on the theatre’s third floor, the "real" Blob and its caretaker Wes Shank will greet fans, as will Godzilla expert and author August Ragone, characters from Ghoul A Go-Go, a New York-based children's show, and The Patient Creatures.

While admission to the StreetFair is free, wristbands must be purchased for access to the special guests, displays and vendors on three floors of the Colonial Theatre. The wristband purchase also includes a seat for either the 11:00 a.m. or 3:10 p.m. double feature, The Blob (1958) and Mothra (1961).

The Saturday Late Show double feature includes The Blob followed by King Kong vs. Godzilla (1962). Doors open at 7:30 p.m. for the 8 p.m. show. BlobFest 15 concludes Sunday, July 13th, with a screening of the The Giant Spider (2013), followed by a showing of The Blob. Spider writer/director Christopher Mihm, will be on hand Sunday to discuss his film which is an homage to the sci-fi movies of the 1950s and ‘60s. Ticket prices for the Saturday and Sunday afternoon and Saturday evening double features are $11 for adults, $9 for seniors and $7 for theatre members and children 12 and under. All available BlobFest tickets can be purchased through the theatre’s website at www.thecolonialtheatre.com. For additional information, call 610-917-1228.

BlobFest special guest Joel Hodgson is the creator of Mystery Science Theater 3000 (MST3K) and starred on the Comedy Central series from its premier in 1988 until 1999, writing many of the episodes. In recent years, Hodgson toured the country with Cinematic Titanic, "movie riffing" with fellow cast members of MST3K, performing live and producing content for DVDs and direct download. He currently serves as Creative Lead for Media at Cannae, a Pennsylvania technology firm working on new drive technologies for satellites and other spacefaring vehicles. Hodgson will help judge the BlobFest Costume Contest and co-host a Trivia Contest, both on the StreetFair outdoor stage.

Making his fourth appearance at BlobFest, Mr. Lobo is the host of the late night movie program Cinema Insomnia--a cult sensation for 13 years and counting and stars as Criswell in the new film Plan 9. Nationally syndicated on AMGTV affiliates and now via Zom-Bee TV on Roku video players as well as an App for Android, he lords over late night slumber party fun with his patented blend of humor and satire. He proves that "They're not Bad Movies--Just Misunderstood." Mr. Lobo will be on hand both Friday and Saturday to emcee events, judge the Costume Contest and greet fans.

Coming to BlobFest from the West Coast, special guest August Ragone is the Rondo Award-winning author of Eiji Tsuburaya: Master Of Monsters (now in its second-printing from Chronicle Books). Eiji Tsuburaya was the visual effects mastermind behind Godzilla, Ultraman, and numerous Japanese science fiction movies and TV shows beloved around the world. Ragone has commented on Japanese film and popular culture on radio, television, in print, online, and at conventions and film festivals (on both sides of the Pacific) for more than thirty years. Considered the foremost expert of the genre in the western world, he has been called a “Walking Encyclopedia” of Japanese fantasy films and television. Ragone will appear as part of Friday’s stage show, and on Saturday he will be signing copies of his book inside the theatre, taking part in a Q & A session on the StreetFair stage, and presenting background on King Kong vs. Godzilla prior to the Saturday Late Show screening.

“We’ve got a great lineup of guests, films and events,” said Colonial Executive Director Mary Foote. “BlobFest 15 will have something for everyone, so bring your friends, bring your kids, and come on out to the Colonial for our biggest event of the year.”

The mission of the Association for the Colonial Theatre (ACT), a not-for-profit organization, is to enhance the collective well being of our region by restoring the landmark Colonial Theatre and promoting cultural, economic and civic life. To that end, ACT presents film, live theatre, music, dance and other community events in the heart of Phoenixville's historic business district.

SUNDAY
1:30 p.m. Doors open for matinee screening
2:00 p.m. Screening of The Giant Spider and The Blob
Q & A with Spider director Christopher Mihm