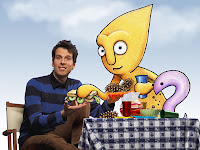 Groovy Gustafer Yellowgold is a small, yellow, cone-headed fellow, who came to Earth from the Sun and has a knack for finding himself neck-deep in absurd situations as he explores his new life in the Minnesota woods. Illustrator/songwriter/musician Morgan Taylor developed the “musical moving book” Gustafer Yellowgold experience as equal parts pop rock concert and animated storybook.

Celebrate the newest DVD/CD "Gustafer Yellowgold's Year In The Day"